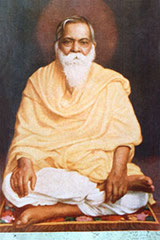 “For the practice of yoga and meditation, there are three important requirements: a sense of morality; mind control; knowledge or intelligence.”

Shrimat Bhupendranath Sanyal Mahasaya was born on January 20, 1877, in the village of Sadhana Para in the district of Nadia in West Bengal, India. Nadia is a holy and spiritually fertile land that has given birth to many great personalities, sages, and saints such as Shri Lahiri Mahasaya, Shri Chaitanya Mahaprabhu, Paramahamsa Hariharananda, and Shri Sitaram Das Omkaranath.

When he was barely two years old, he lost his mother. Sanyal Mahasaya bloomed into a divine person filled with inner joy and beauty in the spiritual environment of his maternal uncle who nourished and nurtured him after his mother’s death. From his early childhood, Sanyal Mahasaya was spiritually inclined. He was always truthful and honest, sincere and divine. However, he was often sick and suffered from many ailments.

In 1893, at the tender age of sixteen, Sanyal Mahasaya was initiated into Kriya Yoga by Shri Lahiri Mahasaya. With deep devotion and love, with humility and surrender, he followed each word and instruction of his master. In a short period of time he progressed rapidly in his spiritual life. Knowing his spiritual progress, Lahiri Mahasaya blessed him to teach Kriya Yoga to sincere seekers, making him the youngest acharya in Kriya Yoga tradition.

Sanyal Mahasaya learned higher meditation technique from Shri Panchanan Bhattacharya. In 1898, he married Kali Dasi Devi, a devout and pious lady. He rigorously continued his spiritual practice in spite of increasing family responsibilities. In 1902, Shri Sanyal Mahasaya reached the state of self-realization and was established in ever blissful state of God consciousness.

He founded, along with Nobel laureate Rabindranath Tagore, the institution at Shantiniketan which later became the famous Viswabharati University. He established Gurudham, an ashram in Puri, to guide and teach sincere seekers into the path of Kriya Yoga. He was a gifted writer who wrote commentaries on Bhagavad Gita and other spiritual books.

On the 18th of January, 1962, Shri Sanyal Mahasaya entered mahasamadhi. Although he was a householder with six children, he devoted his whole life to spiritual practice and the spreading of Kriya Yoga. He was a silent worker, a great Yogi, a divine guide and Guru, an educator, and a true lover of mankind.