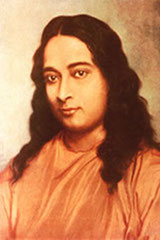 “The moon is not reflected clearly in ruffled water but only on its calm surface. True love for God is manifested through calmness of the mind.”

Paramahamsa Yogananda was born as Mukunda Lal Ghosh on 5th of January, 1893, during a chilly winter, at the foothills of the Himalayas in the holy city of Gorakhpur. He came to warm not only the lives of his parents but also the mankind. Seeing this child Shri Lahiri Mahasaya prophesized “This is not an ordinary child. He is blessed with supremely divine qualities. He is here with great mission to fulfill. One day, this child will become a spiritual engine to carry many seeking soul to the feet of the Lord, with love and care.”

Mukunda’s mother died when he was eleven years old. Her love for Mukunda set alight the spark of divine love for Divine Mother in her son. This love grew day by day, as did his prayer, meditation, and unquenchable thirst for divine love. Mukunda would often post letters to God in heaven and earnestly wait for reply.

Mukunda learned some techniques of Kriya from his father, who was his first guru of Kriya, and developed his interest in meditation. Hamsa Swami Kevalananda, a spiritually elevated disciple of Shri Lahiri Mahasaya, was his private tutor for some time. Mukunda learned deeper spiritual truths, Kriya meditation, and scriptures from his tutor.

Mukunda came in contact with Swami Shriyukteshwar in Benares in 1910, which ended his search for a Guru. The foundation of his Kriya practice, which had been laid by the teachings of his own father-guru and Swami Kevalananda, became reinforced by the strict disciplined instruction given by Shriyukteshwar. Mukunda managed to spend most of his time in the company of his divine Guru and from 1910 to 1915, under the pretext of receiving higher education, he lived most of the time in Serampore where Shriyukteswarji lived.  After graduating from university in 1915, his Guru blessed and ordained him into the holy monastic order and gave him the name “Yogananda”, signifying bliss through divine union. Mukunda Lal Ghosh became Swami Yogananda Giri.

In 1920, Yoganandaji was invited to attend the Congress of Religions, in Boston, USA. Shortly before his departure he was visited by Mahavatar Babaji who said to him “Long ago I met your guru Shriyukteshwar at a Kumbha Mela; I told him then I would send you to him for training. Kriya Yoga, the scientific technique of God-realization, will ultimately spread in all lands, and aid in harmonizing the nations through man’s personal, transcendental perception of the Infinite Father.”

In America, he travelled far and wide, delivering lectures and creating a receptive environment for spiritual life. That he was divinely ordained to do so was evidenced by the prophecy of Swami Vivekananda: “I have laid the foundation of spiritualism, but after me a mahayogi will come who will teach you how to realize God through yoga.” His strong will power, dynamic personality, divine love and high state of spiritual experience enabled him to be a spiritual dynamo that encouraged and inspired millions of people.

After a decade and a half of ceaseless spiritual work in the USA, Yoganandaji returned to India in 1935 to the unspeakable exhilaration of his beloved Gurudev. During his stay, many great personalities such as Ramana Maharshi, Anandamoyee Ma, Kashimoni Devi, the saintly wife of Shyamacharan, and Mahatma Gandhi came in contact with him. Understanding the significance and universality of Kriya Yoga as the scientific foundation of all religions, Mahatma Gandhi and his disciples in Wardha Ashram took initiation from him in 1935. During his stay in Kolkata, Paramahamsa Hariharananda took initiation into second Kriya from him. Shriyukteshwarji bestowed on him the highest monastic title of paramahamsa during this period.

On March 9, 1936, Shriyukteshwar sent an urgent message to Paramahamsa Yogananda to come to Puri and on the same day, in the evening, he consciously left his physical body. Yoganandaji reached Puri the next morning with the intuitive knowledge of his Guru’s mahasamadhi. It is difficult to fathom the sorrow of the realized yogi, who missed the physical company and guidance of his beloved Guru. He performed the burial ceremony on the ashram premises and in the traditional way invited several monks and spiritual luminaries to pay tribute to this great Guru. Yoganandaji returned to west to continue his spiritual mission.

Yoganandaji’s life was eventful, miraculous, monumental, and epoch-making. On October 6, 1951, he wrote to Paramahamsa Hariharananda, “My life is a whirlwind of activity and struggle with work.” A gifted orator and singer, he inundated the hearts of millions with the water of divine love. His autobiography “The Autobiography of a Yogi” inspired millions to follow the path of Kriya Yoga.

On March 7, 1952, when a banquet was given for his Excellency Mr. Binay R. Sen, former Ambassador from India to the USA, Yoganandaji, in midst of his speech, with a blessed smile, attained mahasamadhi to the amazement and stunning silence of all singing a beautiful song in paeans of India’s eternal glory: “Where Ganges, woods, Himalayan caves, and men dream of God; I am hallowed, my body touched that sod.” No physical disintegration was visible in his body even twenty days after death.