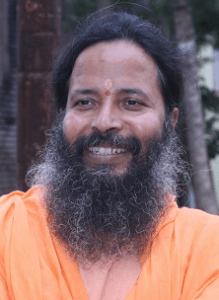 “Love is inner fulfillment. Love is a manifestation of purity, divinity, and liberty in every step of life, in every moment of life. Love transforms life.”

Paramahamsa Prajnanananda was born as Triloki Dash in a remote village in the eastern state of India, Odisha. Raised in a pious and spiritual environment, his intense desire for deeper spiritual truths and God realization took him to many spiritual masters and saints. He would frequently retreat to the solitude of remote Himalayan caves to be in the company of sages and saints to meditate. His search ended when in 1980, he met his master Paramahamsa Hariharananda, a realized Kriya Yoga master, and got initiated into the sacred yogic technique of Kriya Yoga.

Triloki Dash spent much of his time in prayer, worship, and meditation. He systematically studied ancient scriptures of many religions like The Bhagavad Gita, The Bible, The Torah, Yogasutra, Brahmasutra, and Vedanta to deepen his understanding of ancient wisdom.  His rigorous practice continued under the tutelage of his beloved master even while he was working as a professor of economics in a premiere university in India.

In 1995, Brahmachari Triloki Dash was initiated into the holy order sannyasa(renunciation) by his master and came to be known as Swami Prajnanananda Giri. Long before Triloki Dash became a monk, his master had predicted, “Whatever is started by me has to be completed by him.”  With his master’s blessings and guidance Swami Prajnanananda Giri travelled to Europe, USA, and other countries to teach Kriya Yoga to spiritual seekers.

On August 10, 1998, his master bestowed him the title of Paramahamsa, the highest title given to monks and saints who attain the apogee of God-realization. That day was his birthday.

Aglow with radiant wisdom, ever joyful, full with universal love, and aura of renunciation, Paramahamsaji travels all over the world and guides thousands of spiritual seekers. He has written and translated many books on spiritual topics, skillfully interpreting ageless philosophies in the light of modern science and technology. Using a simple, succinct, candid style, Paramahamsaji demonstrates a broad scriptural knowledge, profound wisdom, and a delightful way with words.

Paramahamsaji has undertaken projects that promote spiritual education, social and health services, and philanthropic works around the world. He established Hariharananda Balashram, a residential school for poor and orphan children in Arua near his own birthplace, Pattamundai. Following his master’s vision, he created a beautiful ashram with international repute at Balighai, in Orissa, called Hariharananda Gurukulum which houses the majestic Guru Mandir(Temple of Masters) commemorating his master Paramahamsa Hariharananda.

This world-revered Kriya Yoga master is the epitome of boundless love, wisdom, and action, representing a rare combination of Swami Vivekananda, Shri Shankara, and Shri Chaitanya.