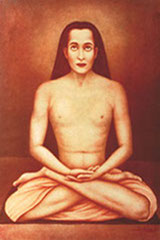 “The worldly man wants to realize God while continuing his daily life. But problems will arise for him, time is short. A simple, easy, ostentatious and highly effective Kriya Yoga is to be taught to them.”

Mahavatar Babaji Maharaj is an ageless saint, a great incarnation, an immortal master, who has been engaged in the divine lila(play) of helping sincere seekers on the path of spirituality. His disciples address him by various names, such as Mahamuni, Tryambaka Baba, Shiva Baba, and Badua Baba(the ancient Baba). Babaji Maharaj cannot be described with any historical or scriptural certainty. His works are divine, shrouded in a mystery that eludes precise detail. Time has failed to reveal the facts about his birth, identity, and life.

Nothing is known about his birth, his spiritual training or his abode. His miraculous appearance and disappearance and his unique way of teaching were narrated by many spiritual personalities, such as Lahiri Mahasaya, Swami Pranavananda, Swami Shriyukteshwar, Hamsa Swami Kevalananda, Paramahamsa Yogananda, and Paramahamsa Hariharananda. Babaji is also responsible for having initiated Acharya Shankara, the spiritual reformer of ancient India into the path of Yoga, and Kabir, the famous medieval mystic, poet, and saint.

Babaji Maharaj’s message of gaining spiritual life through the scientific technique of Kriya Yoga came to the modern world through his chief disciple Lahiri Mahasaya. He brought the message of Kriya Yoga to the West through Paramahamsa Yogananda and Paramahamsa Hariharananda, who were brought by his direction into close contact with Swami Shriyukteshwar for spiritual grooming and stewardship.

The deathless master emanates spiritual vibrations for the salvation of all sincere seekers.